How do we learn to deal with disappointment?

When health concerns mount? When there are cutbacks in the company you work for? When a relationship breaks down? When someone betrays you? When you fail to meet your goal? When you lose something precious?

How, as people of faith, do we learn to deal with disappointment? When what has happened does not make sense, when we can’t understand ‘why’?

In 1788 Captain John Meares named the spot of land overlooking the confluence of the Columbia River and the Pacific Ocean, Cape Disappointment. He was disappointed that the Columbia River was simply thus, a river, instead of the fabled Northwest Passage which he was intending to find.

Mr. Meares was obviously well off-course to his goal. We know today that the Columbia River begins its journey at Columbia Lake in central British Columbia, Canada, and winds itself south hundreds of kilometres into the states of Washington and Oregon before spilling into the Pacific.

In keeping with the rather downer of name, the lighthouse on Cape Disappointment overlooks the hundreds of shipwreck sites off the coast. The United States Coast Guard recognizes this large area of water as the most dangerous among all the river outlets along the continental shores of the United States. 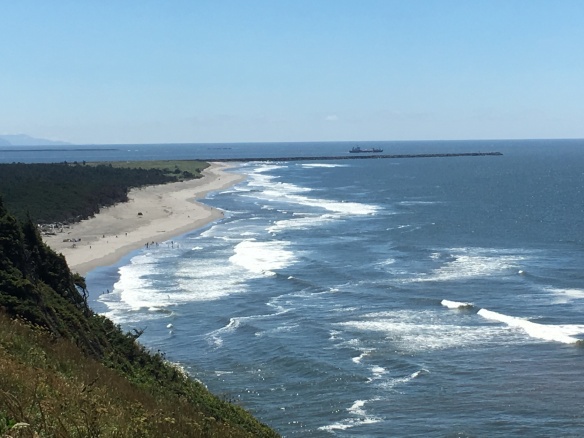 Both the strong outflow of the broad and mighty Columbia competes with the powerful tides and winds generated by the largest ocean on earth. Crisscrossing currents of water create constantly shifting sand bars and opposite flow wave action that can confuse, disorient and ultimately undo any mariner navigating this passage.

Add to this mayhem the fog which has an uncanny knack of coming in unexpectedly on the north breeze, disappearing under the burning sunshine as quickly as it appears. I stood bewildered in such a fog jam on the beach one day, unable to comprehend how a perfectly cloudless sky in beautiful sunshine can change so quickly. Signs are staked at entrances to the shores along the thirty-eight mile stretch of contiguous sand beach north of the Cape warning unsuspecting swimmers of rip currents and unstable sand conditions above and below the surf.

In short, while ascetically beautiful to the eyes, this small part of the world contains hidden, life-threatening dangers beneath the surface of things. Disappointing is an understatement when considering the potentially dire consequences of a mariner’s failed attempt at moving around the Cape, let alone dealing with the failure of not arriving at one’s goal. 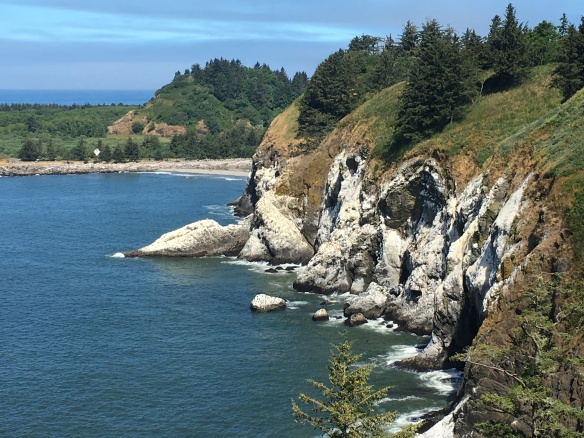 In the first reading for today[1], God responds to Jonah by asking questions, rhetorical though they are. Jonah expresses his anger at God for sparing the “great” city of Nineveh. God’s actions did not make sense to Jonah, even though Jonah confesses his belief in a gracious God who is “merciful, slow to anger, and abounding in steadfast love, and ready to relent from punishing.”[2] He obviously did not think much about the people of Nineveh regardless of God’s mercy. Yet he is internally divided, unable to reconcile his belief with his feelings. He can’t figure it out. He is depressed. And wants to die.

I wonder if we have tended to make God and religion into something and someone to give us quick and final answers. We demand ‘what’ from God when all along Jesus, in the wisdom tradition, is primarily teaching ‘how’. Out of the total of the one hundred and eighty-three questions that are asked of him in the Gospel, Jesus only directly answers three of them.[4] In the New Testament, Jesus’ very first words spoken to his disciples was a question: “What are you looking for?”[5]

Jesus turns the tables on the disciples, as he does time and time again. Rather than give them what they are looking for in a neat and tidy package of an easy answer, he throws it back at them. What do you want?

The first call of Jesus in our lives is a call to be honest with ourselves. Before we can do anything, we need to be true to ourselves. And commit to that lifelong struggle to move beyond our intellect and its insatiable compulsions for answers, towards actions that reflect a trusting heart. Because following Jesus in this world does not, most of the time, make a whole lot of intellectual sense. If we are being faithful.

It is not our job to know everything. God knows all. We don’t have to. Ours is a call to hold, not rid ourselves of, all the messy contradictions of our lives. Abraham, Jacob, Rebekah, Moses, David, Job, Esther, Jonah, Elijah, the disciples, Paul – they were not people who had all the easy answers to life’s complex questions. But they were trusting, obedient, and they acted. Sure, they objected to God at times. Yes, they made mistakes. If anything, the story of Jonah ought to reinforce the importance of a real, personal, topsy-turvy relationship with God. That is the stand-out characteristic of all the faithful.

During the years following the Council of Nicea in the fourth century, a common heresy re-emerged under the leadership of Eunomius, a bishop in Cappadocia (in modern day Turkey). Eunomius argued that we can understand the nature of God simply and clearly. Reflecting on what was the mystery of the Trinity, he implied that God was perfectly accessible to human intelligence.[6]

The Cappadocian Fathers, as they are called, reacted to Eunomius. Basil the Great, his brother Gregory of Nyssa along with John Chrysostom insisted on the incomprehensibility of God to the human mind, and the necessary limits of theological discourse. Their position became the orthodox, Christian stance, ever since.

I wonder, ever since the Reformation, the industrial, scientific revolutions and enlightenment era of the last few centuries in especially the western world, haven’t we slipped back into this heresy once again? Pretending, even though we may not be aware of it, that we should have answers to all of life’s important questions.

It is our natural humanity to strive to know everything. But if we are honest, our minds certainly cannot grasp fully such incomprehensible realities as the mysteries of love, suffering, death and God. Here, we must trust and let go of all our pretenses. “For,” in the words of the prophet Isaiah, “my thoughts are not your thoughts, nor are your ways my ways, says the Lord.”[7]

Disappointment in life is a doorway to a deeper awareness of God’s truth and presence in our lives. Our varied expressions of worship, of living out God’s call, our prayer lives – all these are not so much, then, a matter of petition, of doctrine, of rule-setting-and-following, of solving the discrepancies and inconsistencies of the bible and theological discourse.

Rather, our complex lives with all the joys and disappointments become the tableau, the canvas, upon which we discover we are not alone. And that God is ever present and faithful, regardless of what we do or think. You can’t make God love you one ounce more – by all your right thinking and having all the right answers – than God already loves you right now.

Often, the disappointments of our lives bring us to this realization more than all of our accomplishments and successes. Because if we are going to get anywhere in our lives, we need to hope and believe, despite the disappointing circumstances of our lives.

Cape Disappointment marks another very important place in the history of North America. It is not just a place that signifies disappointment, tragedy and danger. It is also the very spot where the famous Lewis and Clark expedition reached the Pacific Ocean in November of 1805. Yes, Lewis & Clark met with many a disappointment and setback along the 3700-mile route up the Missouri River, across the American Midwest, over the Rocky and Cascade mountains and down the Columbia River Gorge that took them a year-and-a-half to accomplish.

On the journey, were they ever absolutely certain they would make it? As it was, they must have taken their disappointments in stride. For on an uncharacteristically calm day in a stormy November, they made their final push around the western Cape and finally met the limitless horizon.

Significantly, the Lewis and Clark Expedition was called the Corps of Discovery. Today, a 10-mile-long, well-groomed paved path winds through the dunes of Long Beach Peninsula and up into the forest of the Cape. It is called the “Path of Discovery”. 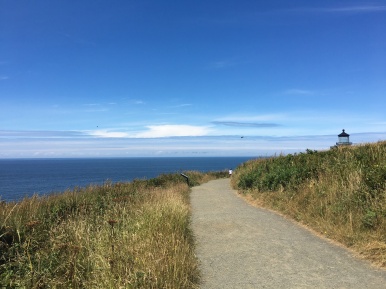 Cape Disappointment is intricately tied to the Corps of Discovery, where both failure and success are entwined in a rich and diverse history of exploration. The spirit of questing celebrated on these shores includes and transcends both the unique events of human tragedy and human achievement. You cannot have one without the other. In one place. In one human being. Each of us is invited to the journey that includes, embraces and transcends disappointment and failure.

At some point along the journey, you need to have hope in order to continue. Even in the midst of all our unknowing, we can believe and trust in the solution, before it happens. 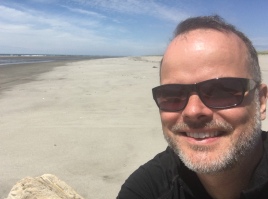