“Suffering produces endurance, and endurance produces character, and character produces hope, and hope does not disappoint us, because God’s love has been poured into our hearts through the Holy Spirit that has been given to us.” (Romans 5:3-5)

We had a problem. In this perfectly finished renovation, something was not right. The microphone jack, on the floor in front of the pulpit here, was not working. 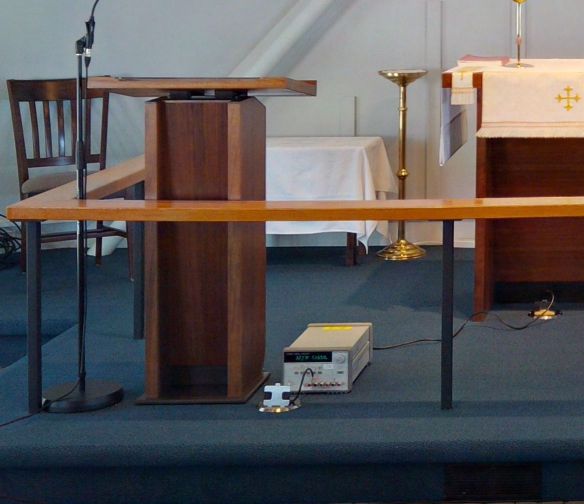 How could this be? Everything was designed and installed as it should be. And yet, something had gone awry. The prognosis was not good. How could it be fixed, without tearing up the carpet, pulling off the baseboard and cutting into the drywall to find out exactly where the wire was shorting out?

For this problem to present months and years from now would be one thing. But to discover this problem in the first week or so back into our ‘new’ space. Uh-oh.

And yet, as you can see and hopefully hear today, it is working. And, as you can see, the carpet has not been ripped and there are no pieces of drywall cut and patched up. How was this problem solved? How were we saved from doom and destruction?

I will say this: For Brian who discovered the problem, it caused him some serious stress, at first. ‘Despair’ might be a word that comes close to describing his feeling, for someone who had already spent hours and hours of his time and energy and resources in the entire renovation project over the last several months.

All that you can see now is a tiny hole on the baseboard no larger than the size of a dime, just above the carpet line on the other side of the chancel. That’s all. A tiny hole, that doesn’t really reveal the depth and breadth of how the problem was solved. 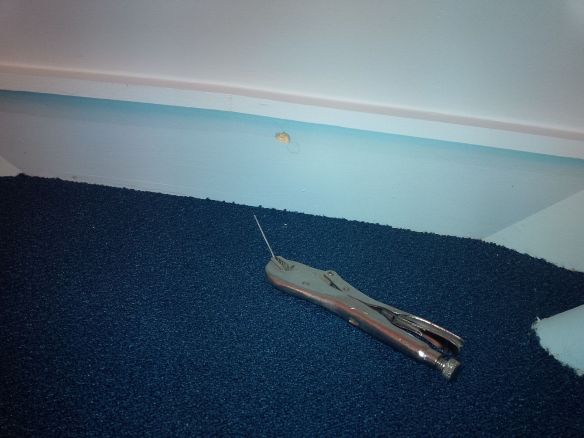 Apparently, a finishing nail had been shot into the wire from outside during the renovation. Unbeknownst to the worker strapping on the the siding, one of the nails embedded into the wire, thus shorting it out. It was, for Brian, a question of finding the proverbial needle in the haystack.

He employed the material resources at his disposal and years of experience in engineering and computer sciences. He brought in an oscilloscope to measure the current, and his infra-red camera, which he ran along the presumed route of the hidden wire. These instruments disclosed an abnormal, irregular heat signature which spiked at the spot of the short-out. From there, it was merely the task to go in with surgical precision, and remove the offending nail. And voila! The microphone now works!

This is definitely a feel-good story with a good ending. Especially because at first, it didn’t look good. It would have been easy to give up, to remain in despair and not do anything about it. And live with, and remain stuck in, some unhappy, dysfunctional space.

The Gospel story about Jesus meeting the Samaritan woman at Jacob’s well (John 4:5-42) has a feel-good ending, at least from the point of view of the woman. She starts by being defensive and confrontational — not seeing nor recognizing Jesus for who this man truly is. She leaves the encounter with Jesus, joyous, liberated, un-inhibited, free.

The story reveals God’s character in Jesus. To emphasize the point the Gospel writer John wishes to make about God’s character, John places this story immediately after Jesus’ encounter with Nicodemus in the previous chapter. Let’s compare briefly the two encounters:

For one thing, Nicodemus has a name. The woman is nameless. Nicodemus is a Pharisee and as such has status, authority and privilege in the social-religious culture of the day. The woman is a Samaritan with whom the Jewish authorities were in conflict. Nicodemus lived in a male-dominated society. The nameless, Samaritan woman is a nobody.

Jesus takes the initiative to cross the boundaries of geography, culture and prejudice to speak with the woman. And not only that, to draw from her the truth, and then empower her to be a missionary for the kingdom of God. The encounter with Jesus transforms her from a nobody to a somebody.

As the dialogue at the well comes to a close, the woman is filled with joy. She is so energized with passion and hope that she “left her water jar and went back into the city” (v.28). We now can see what is not immediately apparent. We can complete the sentence when the Samaritan woman exclaims: “Come and see a man who told me everything I have ever done” … and loved me anyway! She does not say these last four words at the end of verse 29, but they are implicit in her action and in the joy with which she runs.

“Everything she ever did” is a long list of sins. It is always before her, in the judgemental expressions of her neighbours and in her mind for the rest of her life; she has had many husbands, and the one she is living with now is not. For Jesus to have intimate knowledge of that list and for him to know her past, and still love and forgive her — well that’s unbelievably new and fresh as anything she has ever heard. The man who told her everything she ever did … and loved her anyway … is what saves her life. (1)

A caution: Her sin is not the main point in the story. (2) While Jesus’ offer of forgiveness is implied in the dialogue, the text itself says nothing of any sin she has committed (as we see elsewhere in the Gospel, for example, John 8:1-11); nor does Jesus ever actually say words of forgiveness to her.

The focus here is not sin. It is rather in the character of God, and the liberating result of a gracious, truth telling encounter with Jesus. In that moment, the woman sees God. She receives Christ — and leaps up to tell.

Would you? When Paul talks about suffering in his letter to the Romans (cited above) he is encouraging the faithful to see beyond their present, often difficult circumstances to the hope we have in Christ. Indeed our society’s values can make us feel, and keep us trapped in believing, we are nothing:

And yet, Christ comes to remind us that we have everything we need to get through it, and more! We just need to see beyond what is immediately apparent. Jesus breaks all those boundaries of division and exclusion, casting aside our pretence and our cloudy vision. Jesus doesn’t pay attention to what society says is valuable or not valuable. Jesus comes to each and every one of us and says: “Look deeper. I know everything there is about you, and I love you anyway!”

So, what do you have to lose? Take the risk, and do something to make things better in your life, and those around you. Make the hole in that spot you may not be sure about because it’s not visible on the surface of things. And then trust what God has given to you already — the resources at your disposal, the unique gift of your very life, your talents, treasures and time — is worthy of using! And go for it!

Because God will love you anyway.