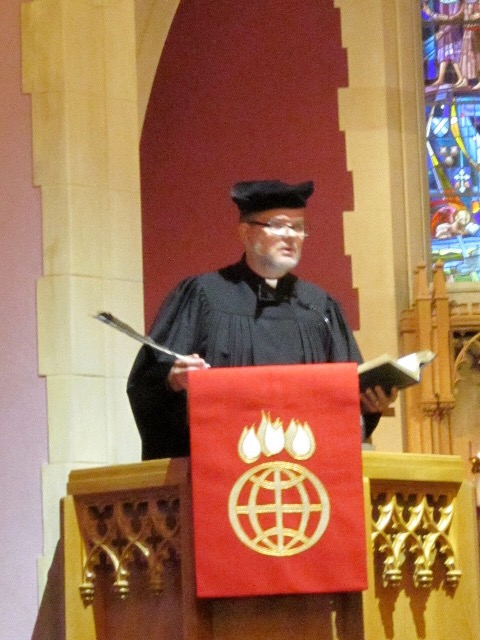 Guten Tag. Allo. Ich heiss Martin. My name is Martin. Liebe Gott! I can speak English! Something incredible happened to me on my way to this time and place. And I cannot explain it! So, “Here I stand.” With you. In this place. Today.
You know, truth be told, I don’t know what to make of this “Lutheran Church”.

Yes, it’s been a long time — 500 years — since I hung the 95 Theses on the door of the Wittenberg Church. So much in the world has changed. Travel, electricity, automation, information systems. And yes, I did write a lot with my hand. I suppose I would do things differently today, as well. Who knows?

But I noticed that some of my words have taken on an iconic status in your discourse through the centuries. And so, I’ll start there and tell you what I observe about your “Lutheran” church today — I feel awkward even saying that word: “Lutheran”! Who the hell do you think I am? “It’s true, we are all beggars!” Even me!

So, let me set the record straight. First off, I never intended there to be a separate church, divided from the Catholic church. Oh yes, a toilet-flushing theology underpinned some religious practices at the time, beliefs that needed reformation. I was excommunicated. And that meant death. But the Lord had a purpose for me still to fulfill, and I was spared. Thanks to Frederick, who let me live in his Wartburg castle for a time being.

Obviously, I still have a purpose or else I wouldn’t be standing here today. I am amazed to see how many different churches exist — and some even taking on my name! In a letter I once sent to my colleague Philip Melanchthon, you know, I encouraged him to “sin boldly, but believe and rejoice in Christ even more boldly.” He must have taken my words seriously — the “sin boldly” part, anyway — since he pushed my reforms to brink of dividing the “one, holy, catholic church.” Dumbkopf!

Which, it seems, has happened here in Ottawa as well. I take it that Lutherans from my Heimat, Germany, arrived quite late in Ottawa — later than in other parts of Turtle Island — is that not what the first nations of this land call it, this Canada?

“What does this mean?”. You who have endured Confirmation classes decades ago, yes I’m speaking to you now: When you memorized parts of my Small Catechism, you will remember I sectioned parts of the Creed, the Lord’s Prayer, and the Ten Commandments, for example, I offered my interpretation of those sections preceded by the question: “What does this mean?”

I did that on purpose. Don’t you know that asking the question itself reflects an important stance towards learning? “What does this mean” is a question that first seeks to understand. It doesn’t presume you already have the answer.

I certainly didn’t at first. I struggled mightily with my own stuff, and spent a whole lot of time on that blessed toilet seat! I had doubt and prayed: “Lord, I believe, help my unbelief!” (Mark 9:24).

The purpose of your Lutheran Council, for example, which functioned between 1968 and 1992 (I learned in your history books), was “to foster greater understanding between Lutherans in Ottawa” (1) — this amid conflicts over biblical interpretation, Communion practice and ordination of women to suggest a few enduring divisions. Good for the Lutheran Council! They were onto something, there, you know!

Learn from the first nations of this land. Among the diversity of Indigenous Peoples of Canada comes the wise advice: Seek first to understand, then to be understood. First, however, to understand the other. Not to persuade, to defend, to self-justify, to impose one’s opinion. Which appears to be the dominant characteristic of relationships in the church and the public today. You believe you first have to defend yourselves.

“What does this mean?” can be a call sign for you “Lutherans” today, indeed for all of mature faith, on how to learn, how to grow, how to move forward to embrace God’s future. You do so first by seeking to understand the other. Ask questions. Try to feel into from where the other is coming in their approach. Listen for smidgens of truth, of potential points of agreement, of overlap between what you hear and where your own heart resonates.

There’s another phrase some have said I wrote. But I didn’t. One of your modern theologians, Karl Barth, actually wrote it, based on something Saint Augustine of blessed memory wrote: “Semper Reformanda” — Always reforming. It’s still good and wise counsel! The Evangelical Lutheran Church in Germany (Evangelische Kirche Deutschland) has as the theme logo for the 500th Anniversary of the Reformation: “500 Years of Reformation”, suggesting that these past 500 years represent a continually reforming church. I like that. Sehr gut!

I know you like “A Mighty Fortress is our God”, ok? But I wrote that hymn in order to bring the popular music of my day into the church. I confess I spent much time in bars during my travels across Germany enjoying the local ales. And I sung along to the bar tunes, and wondered: “Wouldn’t this sound great in church!” And so, I took some of those tunes and transformed them into hymnody.

Why are you still singing “A Mighty Fortress” to celebrate the Reformation? The very idea of 21st century “Lutherans” celebrating the Reformation by clinging to the events of the 16th century doesn’t make sense, if you believe you are truly Semper Reformanda. I travelled all this way through space and time; I want to hear some of your new songs!

We should be singing this century’s music rather than smugly resting on the laurels of the past, you would say. You should be plotting where the reformation goes from here. Perhaps in this the 21st century, when so many of your traditions have seen the institution fall into the malaise of irrelevancy, you need to echo the cry: “Semper Reformanda” — “Always Reforming”. Indeed, the church in every age stands in need of reformation (2).

In my Disputation in Heidelberg, a year before I hung those famous Theses on the doors of the Wittenberg Church, I stated that, “The Law says ‘do this’ and it’s never done; Grace says, ‘believe in this’ and everything is already done.”

The quality and practice of faith today is on trial. What do you believe about God, and your life with God, others and this world? Reformation starts with those questions.

I’m glad to see you still say, at least, that we are justified by grace through faith.

And when I read the Jeremiah (31:31-34) text for today, I must confess we are often our own worst enemy. When we try so hard and work so hard but underneath all that work is a niggling belief that it’s all up to us. We are most ready to hear those words of grace, forgiveness and mercy, I will confess, when our own efforts are exhausted. When we are weary of our inner turmoil we are ready to hear the Gospel of Jesus Christ. And believe. And trust.

Because by my own understanding or strength I cannot believe in Jesus Christ, in God, or anything good!

Do the work of God, yes. But allow God, in the end, to reap God’s own harvest. Believe in that which cannot be seen, towards that which can be seen (Hebrews 11:1). It won’t be our accomplishment when it finally happens. Because all is grace. All is love.

“This is most certainly true.”

I’ll tell you what else is true. There are some new words circulating among Lutherans in Ottawa these days. I’ve heard them. Who are you? You are “many communities and one church”. And you are “better together.” The fragmentation of the church which has been the unfortunate legacy of the Reformation needs reformation.

How can you see it? This is a matter of faith and belief? Do you believe that though you are many communities you are still one church? Do you believe you are better together?

This is not a figment of someone’s imagination that has mere mythic, allegorical status, invisible and irrelevant.

And it is happening in a Lutheran community near you!

This is most certainly true!

(2) Dawn Hutchings, pastordawn.com “Enough with ‘A Might Fortress’ Already! Sing a New Song”